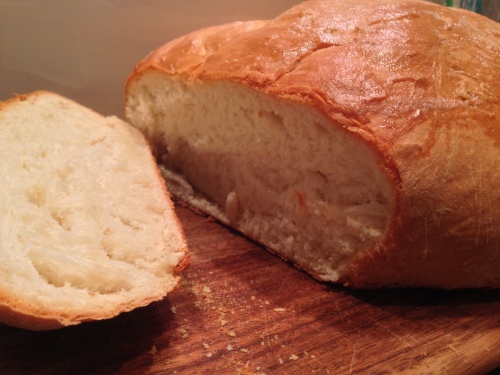 The idea of baking bread (or really just working with yeast) has always intimidated me. It’s something about the rising dough and having to set aside so much time for the whole process that kept me away from it. It’s funny that I worry about the commitment, since I’ve actually made bread before: when I was little, my grandmother would bake bread with me and my sister, and it was always so much fun. We would knead the dough and throw flour around, and then make three loaves of bread — one regular-sized one, and two tiny bread loaves in miniature bread tins, so that my sister and I would each get our own little creation. But of course my grandmother did the majority of the work, and she made it all look perfectly easy, as she does with all of her work in the kitchen.

So I was worried to take the first step. But while perusing a family cookbook my grandmother had given me, I spotted a recipe for white bread. As a note at the end, my grandmother had added: “It is very hard to ruin bread dough, and even if it isn’t perfect, it will still be delicious.” It was just the push I needed, and I tried out the recipe.

The bread was delicious and I’ve successfully conquered my fear of working with yeast! It’s way easier than you think, so give it a shot 🙂 This recipe makes a very large loaf of bread, just as a warning. I’m going to include the directions my grandmother gave me, since they took the pressure off the whole idea of baking bread for me (and because she is a wonderful writer!). A big thank you to her for giving me this recipe and the courage to try it out.

Round Loaf Bread (from my great grandmother)

In a big mixing bowl, dissolve the yeast in the warm water, and let it sit while you do the next step.

In a heavy saucepan, heat the milk until bubbles form around the edge, just before it would boil.

Take it off the stove and add the butter, sugar, and salt, and let the butter melt. Cool this mixture until it’s lukewarm (add an ice cube if you’re in a hurry). When it’s lukewarm it will feel comfortable against the skin of your wrist.

Add this mixture to the yeast and water in the bowl.

Measure out the flour with a measuring cup and add it all to the bowl. Stir in the flour as much as you can.

When it gets hard to stir, turn it all out onto a lightly floured counter area and mix and knead it with your hands until it gets smooth.

If it’s sticky after all that flour has been mixed in, add a little more flour as you go. Knead it until it feels smooth and sort of elastic.

When you’re done kneading, return the dough to the bowl, cover it with a dish towel, and set it in a quiet, warmish spot to rise. It should double in size in an hour or two. 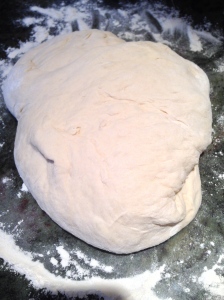 Now punch it down and knead it again for half a minute.

This time it will rise more quickly, so keep an eye on it, and when it starts to look like it will soon be double it’s former size, head up the over to 350-375 degrees F. Bake it for 45 minutes to 1 hour in the center of the oven. It’s done when the bottom is medium brown and it sounds hollow if you tap it. When you take it out, you can brush some melted butter on top. Or just rub it gently with a stick of butter. 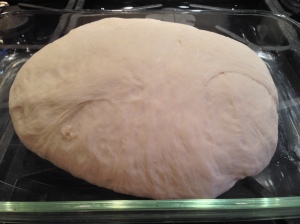 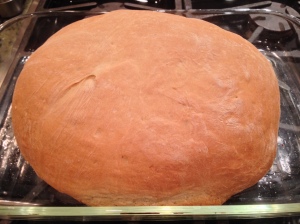 NOTE: If you should have to interrupt this process for some unexpected events, set the rising dough, covered, in the refrigerator. In there it will rise much more slowly, and when you get back to it, you can just let it warm up and go forward from wherever you were in the process. It is very hard to ruin bread dough, and even if it isn’t perfect, it will still be delicious.

This entry was posted in Noms and tagged Bread, conquering your cooking fears, Dough, Yeast. Bookmark the permalink.